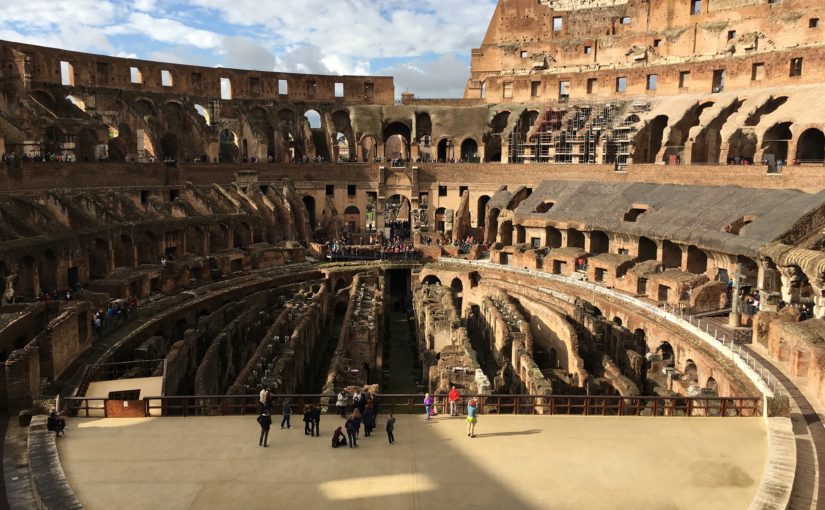 FL1 commuter trains normally depart every 15 minutes from Fiumicino Airport’s railroad station (except on Sundays and holidays, when trains may run every 30 minutes, depending on current schedules.) Look for a double-deck train on the opposite side of the platform from the Leonardo Express.

You may find a long queue at the first ticket machine you see on the way to the trains, but there are numerous machines/booths and shops all selling tickets at the same price. There is also a travel agent across from the ticket booth, who will sell tickets to any destination in Italy, with no markup. The ticket must be validated just before travelling by punching the ticket in one of the little green and white oval machines dotted about the platform area. (Make sure it prints the time and date on the ticket.)

Get off at Roma Ostiense.

Rome has a subway that can take you to basically everywhere of interest. I recommend you purchase Rome metro card, which is available at kiosks within every station in 1-day, 3-day and 7-day denominations at prices of €6, €16.5 and €24, respectively, as of August 2013. The card permits you unlimited use not only of the Rome Metro, but of the buses that run through the city on a slightly more reliable basis than the subway.

Climbing its dome (opens at 8am) for a panoramic sweep of the city across the river.

Opens at 9am. Vatican museum attractions include Borgia apartment, Raphael rooms and the Sistine Chapel. It’s a big museum – give it 2-4 hours

Just south of Vatican City stands Castel Sant’Angelo, where popes sought solace during sieges. Climb to the top for splendid views of Vatican City and the Tiber. At its base you can see the Ponte Sant’Angelo with Bernini’s exquisitely carved marble angels.

One of the most popular public spaces in Rome, the magnificent, oval-shaped Piazza Navona is lined with restaurants, gelaterias, souvenir shops, and the Museo di Roma inside the Renaissance Palazzo Braschi. The city’s Baroque art is on full display here. Bernini’s Fontana dei Quattro Fiumi features exquisitely carved figures representing the world’s four great rivers, and legend has it that the figure with his arms extended is recoiling in horror from the church of Sant’Agnese in Agone by Borromini, Bernini’s rival.

Wander down the small street next to the church and make your way toward Via della Pace, one of the city’s most picturesque streets. At the end stands the church of Santa Maria della Pace, its white portico gleaming in the sun. Make time to stop for un caffè or a glass of wine at Antico Caffè della Pace, a legendary nineteenth-century haunt still as chic as ever and one of the best places for a classic Italian aperitivo.

cappuccinos are only drunk at breakfast. After that, order un caffè (a shot of espresso) or un caffè macchiato (a shot of espresso with a dollop of steamed milk). If you ask for a latte, you’ll simply get milk. In the hotter months, ask for un caffè freddo (cold espresso sweetened with loads of sugar) or crema di caffè (the Roman equivalent of a frappuccino).

Two of the most famous cafés—Tazza d’Oro and Caffè Sant’Eustachio—hold a fierce rivalry and are just blocks from each other. Try them both and see which you prefer.

Giolitti, a few blocks from the Pantheon, is the city’s best old-school gelateria. It’s been around since 1900 and serves dozens of flavors in a rainbow of hues. If you’re getting yours to go—and it’s less expensive if you do—line up at the cashier and pay before ordering. A small cone gets you two flavors plus whipped cream.

The Jewish Ghetto, full of distinct charms, forms a small area between Campo de’ Fiori and Piazza Venezia. From the Renaissance until the nineteenth century, its gates were locked after sunset. Today it still feels distinct from other neighborhoods because of its concentration of Jewish restaurants, shops, and bakeries. Ristorante Piperno is one of the oldest and best places to get carciofi alla giudia (Jewish artichokes), which are fried whole and absolutely delicious. Also try the fiori di zucca (fried stuffed zucchini flowers).